Although Rancho Camulos became well known among Californians for the accomplishments of three generations of del Valles in both the political and agricultural history of the state, it is best recognized as the “Home of Ramona.” When Helen Hunt Jackson published her best-selling novel Ramona in 1884, it was her intention to supply the general reader with an appreciation of the California Indians’ plight as illustrated by the trials and tribulations of the fictional Indian girl, Ramona. Disappointed that A Century of Dishonor, her earlier book reciting past injustices towards the Indians, received so little notice, she wrote Ramona hoping to elicit popular support for the Indians, much as her acquaintance Harriet Beecher Stowe had done with Uncle Tom’s Cabin. Ramona inspired four motion pictures and a pageant performed annually in Hemet, California, since 1923.

The setting and characters in Jackson’s book appear to be composites drawn from places Jackson visited and people she met in her travels throughout Southern California during the early 1880s. Various portions of the novel were drawn from her visits to California Indian reservations, missions and ranchos. It appears likely that Jackson chose Camulos as the setting for a portion of her novel upon the advice of her close friends, Antonio and Mariana Coronel. In the opinion of the Coronels, Camulos was one of the few remaining ranches still reflecting its colonial origins. Antonio Coronel assisted Jackson in the preparation of an itinerary of ranches and missions, and Jackson heeded their advice, briefly visiting Camulos on January 23, 1882. In her novel published two years later, Ramona’s fictional home on the “Moreno Ranch” was located “midway in the valley [between lands] to the east and west, which had once belonged to the Missions of San Fernando and San Bonaventura [sic]” This geographical location, and the description of the setting recounted in the novel accurately matched Camulos:

The house was of adobe, low, with a wide veranda on the three sides of the inner court and  a still broader one across the entire front, which looked to the south…. The two westernmost rooms had been added on, and made four steps higher than the others … Between the veranda and the river meadows, out on which it looked, all was garden, orange grove and almond orchards. [Jackson, Helen Hunt, Ramona: A Story. Boston: Little  Brown & Company, 1884].

Additional features of Camulos accurately referenced in Jackson’s novel were all unmistakably part of the ranch setting, including the wooden cross on the hill, the chapel, the bells and the fountain and courtyard. Among the earliest articles recognizing Camulos as the inspiration for the fictitious Moreno Ranch was a San Francisco Chronicle article by Edwards Roberts, published after his visit to Camulos on April 27, 1886, just prior to the completion of the railroad line through the Santa Clara Valley.

Jackson’s novel was serialized in the Christian Union and quickly became a best seller and an American classic. It inspired four motion pictures and a pageant performed annually in Hemet, California, since 1923. D.W. Griffith’s silent motion-picture version of Ramona, starring Mary Pickford, was filmed at Camulos and the nearby town of Piru during a two-day shoot on April 1 and 2, 1910. At the time this one-reeler was made, it was billed as the Biograph Company’s “most elaborate and artistic movie yet filmed.” The chapel, the adobe and patio, and the nearby mountains were all used as backdrops.

Railroad promoters, writers and photographers all became drawn into the burgeoning Ramona craze, publishing hundreds of articles in books, magazines and newspapers touting the Ramona connection. The book ultimately had an entirely unanticipated, but profound cultural effect. Its publication in 1884 and subsequent popularity almost perfectly coincided with the arrival of the Southern Pacific Railroad in Ventura County in 1887. The romantic story of Spanish California coupled with the vivid descriptions of the setting brought literally thousands of curiosity seekers looking for the “Home of Ramona” and the fictitious heroine. 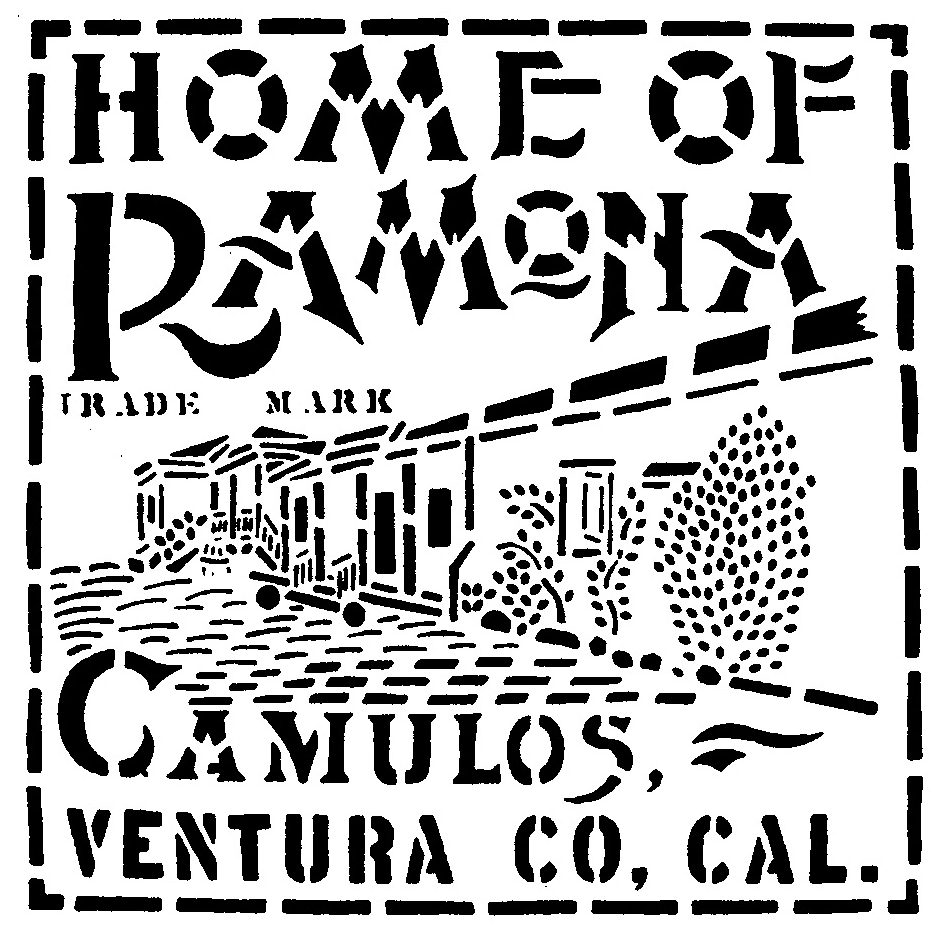 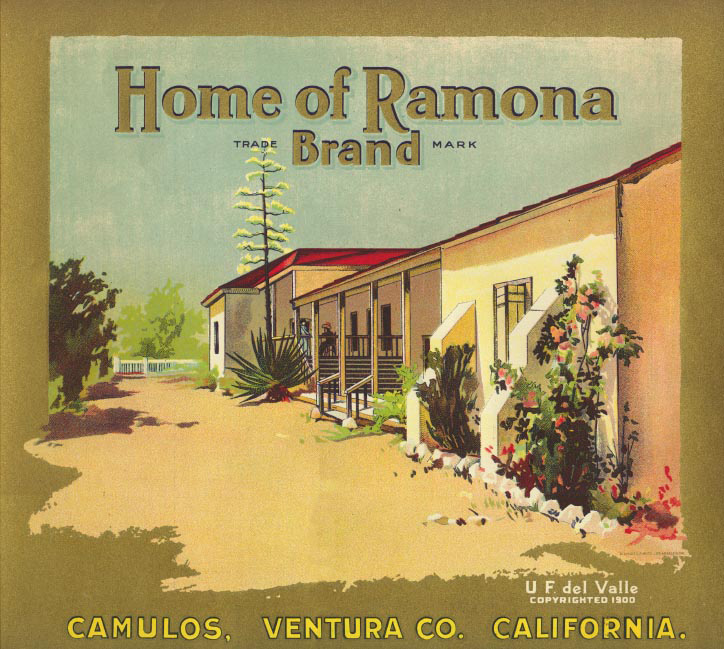 Ramona became so phenomenally popular that schools, streets and even towns were named in honor of the novel’s fictional heroine. With the huge influx of tourists and settlers flooding into California during the 1880s and 1890s on the newly established railroads, many communities claimed Ramona for their own in order to profit from the vast tourism bandwagon. Writers such as George Wharton James and others visited Rancho Guajome and the Estudillo house in San Diego to photograph and research the conflicting claims for the setting of the novel, a controversy made possible by the death of Helen Hunt Jackson in 1885. James, in his 1909 book Through Ramona’s Country, expressed the opinion that Camulos was still the “avowed and accepted home of the heroine.” According to James, Camulos had changed little since the time of Jackson’s first visit. In 1888, Charles Lummis, a close friend of the del Valle family since his arrival in California four years earlier, published a promotional booklet filled with photographs he had taken at the ranch, proclaiming Camulos as the home of Ramona.

Camulos was widely photographed and painted by many of the professional photographers and artists of the day. Pasadena photographer Adam Clark Vroman illustrated Camulos in the Little, Brown and Company’s 1912 edition of Ramona. Famed artists Henry Chapman Ford and Alexander Harmer painted Camulos. Well-known eastern illustrator Henry Sandham, who accompanied Jackson on her tour of the missions and Indian reservations, made many sketches and paintings of Camulos which illustrated his edition of Ramona in 1900, published by Little, Brown, and Company.

In 1887 Ventura photographer John Calvin Brewster photographed Camulos, recreating scenes from Ramona which eventually were published in the San Francisco Chronicle. Del Valle family, members and friends posed for these scenes and others that depicted the romance between Alessandro and Ramona. Occasionally the family complained about the excursion trains that stopped at the ranch and the avalanche of tourists that descended upon the ranch demanding to see Ramona, and invading the orchards and house. Reginaldo del Valle even considered at one time building a hotel to accommodate tourists, when he thought his mother’s gracious hospitality was becoming a burden in her later years and the cost of accommodating so many guests was getting out of hand. The del Valle family eventually capitalized on the Ramona phenomenon by establishing the “Home of Ramona Brand” trademark for their oranges.

Camulos continued to receive tourists at the ranch even after the Southern Pacific Railroad relocated its main line to the south through the Santa Susanna Pass in 1903. Two daily trains continued to make trips down the Santa Clara Valley in the 1920s until passenger service was discontinued in the 1940s. Throughout this period, Camulos continued as a scheduled stop. An article in Sunset Magazine for December 1925 indicated that Camulos was still welcoming visitors.

As one of the most widely recognized settings for Jackson’s novel Rancho Camulos became not only a tourist destination in and of itself, but was also emblematic of California’s colonial past in both reality and in fiction. It is a tribute to the power and influence of Jackson’s novel that her popular fiction achieved a capacity to fire the collective imagination of the American public to an extent that the more prosaic reality of colonial California might never have equaled. It was in large part this brand of fictionalization and romantic invention that induced Americans to move in vast numbers from east to west, with expectations of discovering the fabled land of Ramona.

By the time of American involvement in World War II, the anti-American sentiments expressed in Ramona combined with its dated sentimentalism ended its popularity with readers. Also a factor was the wartime attraction of newcomers to California motivated by jobs, not picturesque scenery. The Ramona myth played a central role in fashioning a regional identity for Southern California at a time when the West was trying to establish a historical and cultural legitimacy separate but comparable with the eastern part of the country.